You are here: Home / age

It’s all happened to us, even from the most innocuous of activities: picking up my keys. Does our body really start to fall apart as we age?

I just jumped in my car, and as I went to grab the door handle with keys in hand, I dropped my keys.  While seated, I twisted and bent over to pick them up – then I felt it – a tiny twinge in my lower spine. Not enough to hurt, but just enough to let me know I’d done something bad down there.

Not thinking anything of it, I drove away, the twinge becoming pain and then acute pain. I drove myself to a physio. By the time I got there, I couldn’t get out of the car without assistance. I had ruptured a lumbar disc.

I’m not alone. Lots of friends have told me similar stories – doing something simple, and then twang – something happens.  Generally it’s shrugged off with the statement “this is what happens at our age. Your body starts to fall apart.”

There is some truth to it. Your muscles do start to change in your 30s, says Professor Alan Hayes, a muscle and exercise physiologist at Victoria University.

“You have … peak muscle mass in mid-20s and certainly after that point, by about your mid-30s, they start to decline.

“But if you’re that age and just blaming your body, that’s a bit of a cop out.”

James Fell, a sports scientist at the University of Tasmania, says there’s probably no reason to attribute such muscular niggles to age until your 50s.

Professor Hayes thinks it’s even higher: “I don’t think you should do that until you’re in your 70s.”

So if I can’t blame my age, why does it feel like my body is about to fall apart?

In short, a lot of it is due to activity — or lack thereof.

“There’s no doubt that the sedentary lifestyle aspect is a major contributor to the injuries that we’re going to sustain,” Professor Hayes says.

When you sit at a desk for hours on end, for instance, your hip flexor muscles, which connect your spine, pelvis and upper legs, remain constantly shortened, Dr Fell says.

“And then you get up out of your chair and expect them to function normally, and you injure them or other associated structures.”

With being sedentary comes a greater risk of obesity. Fat can work its way between muscle fibres, further decreasing strength, and into bone.

The “your body falls apart in your 30s” idea probably also has something to do with that particular life stage, Bond University sports scientist Peter Reaburn says.

“There’s marriage. There’s children. There’s career focus. Your ability time-wise, motivation-wise, stress-wise to be able to train as you did as a youngster is compromised,” he says.

Pregnancy, too, can make women more susceptible to injury, even after they’ve given birth, Dr Fell says.

“If you’ve had children, you’ve had serious changes to your centre of gravity, your ligaments,” he says.

Pregnancy elicits release of a hormone called relaxin, which (among other effects) causes ligaments to become more stretchy.

“They can remodel [back to normal after the child is born] but can also be permanently stretched, increasing the risk of injury,” Dr Fell says.

Use it or lose it

Three things tend to happen to our muscles as we age, Professor Reaburn says.

You see a similar pattern with muscle mass, he adds. The third key factor is our fast-twitch muscle fibres, which are used for rapid movements like sprinting or jumping, also shrink — even in lifelong sprint athletes.

“Non-athletes experience a much steeper decline [across all three],” Professor Reaburn says.

There is some good news. Resistance or weight training can help slow muscle loss.

“Ninety-year-old women still have the ability to put on muscle with resistance training,” he says.

“Walking is great, running is great, cycling is fabulous, but those things don’t help you to build up your muscle, so you really have to incorporate some resistance training into your daily activities,” he says.

Just remember to up your protein intake to give muscles the materials they need to knit back together, we we don’t fall apart – he advises.

Are you over the age of 40 and feel like your body is telling you something?  What do you do to keep fit and moving?  Do you incorporate resistance training?  We’d love to know!

If you’re unsure about what to do, or whether your body is ready to start something knew like lifting weights – then feel free to give us a call or book in for an assessment.  You can book on-line HERE, or call us on 1300 842 850.  We’ll make sure you don’t fall apart. 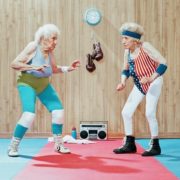 Easy exercises to keep you healthy and active as you age.

For many people, aches and pains have become a normal part of their life, especially as they age. However, it doesn’t matter if you’re 7 or 77, pain is not a normal part of life, and should be something that you take seriously. This includes general aches and stiffness from your daily life!

Here are some easy exercises and body management tips to keep you happy, healthy and moving beautifully through life! Lastly, if you are experiencing pain on a daily basis and can’t seem to find relief, make sure you seek help. You can always give your physiotherapist a call, if you don’t have one you can make an appointment with us, or book in to see your GP.