Barefooter David has seen and done some incredible things throughout his life. Sal recently sat down with David to hear his incredible stories and how David continues to live his Barefoot Lifestyle.

David we understand you’re an avid believer and advocate for lifelong learning and you have 3 (almost 4) degrees. Can you tell me first of all what studies you have done over the years?

Well I started up doing my biology degree in the UK, in the late 1960s. And then came to Australia to do a PhD in 1968. I didn’t complete my PhD as it was on the effect of light on plants… and that meant spending 8 hours a day in the dark! I did learn a lot and earned my Masters for the work I completed.

After this I did something totally different, I was an educational TV producer for a while at the University of New South Wales in Sydney. Then I went back to England to see my parents for the first time since I’d left seven years previously. Funnily enough towards the end of that trip I was wondering to myself “well how am I going to get back to Australia?” Because I didn’t want to stay in the UK —  there’s too much rain. I saw an ad in the paper for a scholarship at Griffith University in Brisbane at the new School of Australian Environmental Studies so I came back and I did my PhD… not in the dark, and also not in biology!

Over the years my main career has been in the environmental aspects of energy policy which took me all over the world. That was definitely the area I worked in the longest – for 42 years, so far. But I’ve always been interested in learning about other things.

And most recently at the age of 68 I started an external course through Charles Darwin University on indigenous culture. I have found it to be really interesting and at this stage I’ll probably complete it over the next year.

I’m also involved in the Mt Gravatt Men’s Shed and what attracted me to joining was the opportunity to learn more things.

Is there anything you’re struggling with for your current studies?

Well, while I’m studying for a Graduate Diploma, it’s actually a series of undergraduate courses, and undergraduate courses have short word limits. And because I spent 40 years writing long technical reports I’m finding it difficult to stick within the 1,000 word limit. Something I have noticed over the years is that writing about things is a great way of learning about a topic, you really need to know what you’re talking about to write about it.

You said about the Men’s Shed that people come there to learn and that’s probably what interested you initially. Can you tell me about more about the Shed and what your role is there? 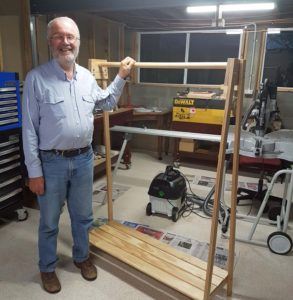 Well yes I went to the Men’s Shed because I wanted to learn about how to use big machines like drop saws, bench saws, large routers, drill presses and things like that. The Shed has a very well-equipped woodworking and metalworking workshop and great teachers.

Did you know anybody at the Shed before you went?

I knew nobody.  Now I’m meeting all sorts of different types of people who I would normally never meet. There are lots of very practical people and there are guys there who have been Manual Arts teachers for 40 years and they are still teaching Manual Arts at the Shed. I guess the age range of their students has increased now!  What we’re doing at the moment is revising the constitution of the Men’s Shed to make sure we focus on promoting men’s health because the Shed is a registered health promotion charity. The way we promote men’s health is by providing opportunities for men to do things together.  In this way we can ameliorate so many diseases that are avoidable and originate from isolation. Many men once they retire or cease employment are often very isolated therefore what we do is provide a place where men can come and do things together.

And there’s a very large variety of things to do, I mean there’s something like 25 different activities that are available in the Shed, and they’re not all just workshop activities.  There’s social activities and all sorts of different things.

The next question I have for you is about travelling around the world.  With the consulting roles you have worked in you did quite a lot of travel even up until recently.

Can you tell us about places in the world that stood out to you for some reason.

One that stands out was Lapland in the far north of Finland which I remember vividly because Larry, the guy I was working with, and I were riding around on Skidoos. He was from the US and somehow he was a great driver, while I wasn’t. I just kept falling off. Because Larry was on the back when I was driving, he fell off too, but he was very gracious about it.

Probably the most amazing thing about that place was the airport – it was a tiny shed so far from anywhere in the world. When we all turned up to leave, there were about 20 people in our group heading to different places all around the world – Sydney, a small town in Italy, a little rural town in the US etc. The airport didn’t have printed luggage labels for all these places and the two women just handled it – writing out the luggage labels by hand. There were 3 or 4 changes of planes for each of us and I remember thinking “Is that suitcase really going to make it to Sydney?”. Well it did, no problem.

That was at a meeting of a group attached to the International Energy Agency who I worked with for 15 years. That group had meetings every six months, mostly in Europe but also in some Southeast Asian countries and in the US and occasionally in Australia,  so we went to all sorts of different places. 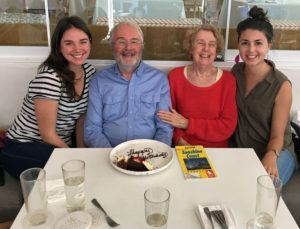 We also had a meeting of this group on a ship that was travelling along the West Coast of Norway, delivering supplies to all these little towns at the ends of fjords. We started off in Trondheim and we ended up in Tromsø, which is right inside the Arctic circle. Having a meeting on a ship is actually very useful… you can’t get off so everyone has to stay in the meeting.

There was one guy coming from the UK who couldn’t make the first day of the meeting so he had to join the ship at this little tiny town on a fjord  somewhere in Norway.  When he flew in there was hardly anyone there but eventually he found some guy who would drive him to the landing stage. Essentially he said “I need to get on a ship that will be arriving at the wharf in an hour”.  “No worries, I’ll drive you”.

And the other place of course is China. I spent six years travelling to China three or four times a year for a couple of weeks at a time and that was fascinating.  I mean in some ways it was different in other ways it was very similar to the West because all the big cities in China now are very much like western cities.

And that’s true in all the big cities in China now. We did manage to do a little bit of travelling outside the big cities and that was really interesting because it was different. We were able to see farmers driving around on bicycle carts carrying their produce and all that sort of stuff.  I would have liked to have done a lot more travelling around the country but most of the work that we were doing was in the big cities. 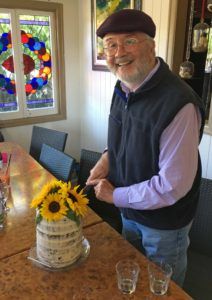 You’re turning 70 next week, is there any advice you would give to your 20 year old self?

I think what I’d say is don’t be afraid of people. Over the years, if I could write something rather than talking to somebody that’s what I’ve always tended to do. I feel safer expressing what I think in writing than I do verbally and especially relating to people in groups. So I’ve leaned in more lately, and that’s one of the things that I’m learning at the Shed, relating to people and I’m starting to like it.

I’d also say that over the last 50 years I have packed a lot in and have always avoided boredom. I always have projects on the go and tend to do something different as often as I possibly can. So I’d say to 20 year old David “There’s a lot of change and interesting things coming your way! You’ll never be bored!”

We absolutely love hearing from about the amazing things our Barefooters get up to. If you would like to read our previous Barefooter stories click here.

So what exactly is Sports Physiotherapy?
Scroll to top