For those of you that haven’t heard (and I admit that would be pretty difficult as I haven’t stopped talking about it!) I ‘MC’d’ the Brothers Reid homecoming party last Friday on the roof top at Brisbane State High. We chose this incredible  location with views over the city as it was our high school and an appropriate landing place for the boys after 2 and half years on dirt. That’s right, 2.5 years overlanding round the world on DR650s raising money and awareness for Mental Health research at QIMR Berghofer Medical Research Institute.  Brothers Reid are 2 brothers; Dylan and Lawson Reid, both engineers and friends of mine that set out to find a silver lining on their trip around the world. 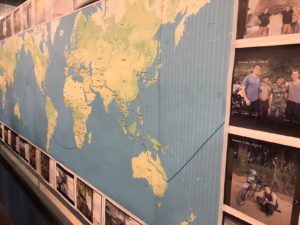 As for the dollar stats – as of right now (Monday afternoon) I think it is around:

So that was enough for the journalist from the Courier Mail to call this adventure “not just a self indulgent joy ride” – and the boys breathed a collective sigh of relief “we’ve gotten away with it” they said sarcastically. 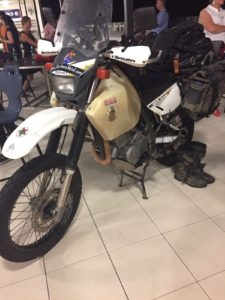 There is so much more to this trip than the stats, and in fact I think the boys avoid the stats when talking about it as they are true overlanders at heart… the rest of us are happy to hear the stories… as it is difficult to even comprehend embarking on such a journey.

Friday night was a great way for the boys to officially end their trip – talks from Dr Michael Breakspear (the lead researcher where the Brothers Reid money is going) and the boys were fantastic, topped off by the fact we had 3 bikes there – 1 setup ready to ride, 1 set up in camp mode (complete with jocks ‘drying’ on the handlebars) and 1 new 2018 DR650 from Olivers Motorcycles to compare the shininess (or lack thereof to ‘Bent and Buoyant’ as the bikes are now affectionately called). And really we were lucky to pull it all together on time (we had 3 hours to set up but managed to have it all come down to the wire in the end 😊 )

This is part of my introduction speech of the night that I thought you would enjoy to read:

“I’d like to set the scene of what happened just before these guys left Brisbane 2.5 years ago.

It was March 2015 – a Friday night – We were all at the Archive bar down the road here in west end for the send off. A big group of friends and family just like tonight, 2 big shiny new DR650s in the pub and  the boys with their eyes falling out of their heads tired trying to get everything done last minute – they were about to embark on the Hard way round. Overlanding round the world East to West over 6 continents, 50 countries and 100,000km. 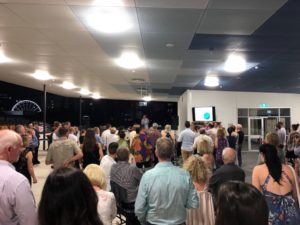 Laws was still in his 20s and getting away with being the baby bro and Dyl had only broken 4 bones in his body and Dylan gets up to explain some of the reasoning behind planning this epic adventure: he says: we lost Heidi in 2011 to suicide and people kept telling us it would get better, or that there’d be some kind of silver lining. And I can say for sure, even now almost 4 years later there isn’t. So we’re going to go make our silver lining and see if we have an epiphany on the the way. Who knows, if we don’t have one we might just need go for another lap.

Then he said one of the most brothers reid things ever: I don’t know why everyone’s congratulating us, we haven’t even done anything yet.

At that moment I knew they would make it. What I wanted to first acknowledge is what in my opinion brothers reid have really done. . . they have made a significant step in making mental health ok to talk about.  By sharing their story of Heidi over and over again they have made an incredible way for the rest of us to open up dialogue on this very difficult subject. Over the past 2.5 years I have had countless conversations with people about mental health because I could say: I’ve got 2 ratbag mates riding round the world on dirt bikes raising money and awareness for mental health and from there the conversation would just flow. So thank you, you made it ok to talk about.”

We partied into the night and you’ll be happy to hear we managed to pack up in much less time than it took to set up. With the bikes on display in full authenticity all the boys clothes were in bags or ‘drying’ on their bikes, which had to be left under State High until Monday morning… Dylan had the foresight to grab his bag of clothes off the bike, Laws didn’t… so spent all weekend in the same outfit. Suffice to say he’s adjusting well to ‘normality’.

Enjoy the photos and check Brothers Reid out on facebook if you’d like to watch videos and find out more. 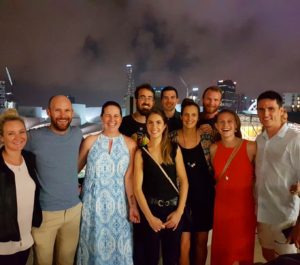