You have a huge passion for snowboarding, which as seen you going to Japan multiple times and loving it! Give us a run down of the last japan trip and how your snowboarding went.

Yes, I have a huge passion for snowboarding. My last trip to Japan was my third time there. My second visit was to Niseko. It is such a beautiful country. The landscape is awesome, the people are friendly and the snow is amazing!

This trip, though, was a bit different. I was recovering from a rather nasty broken ankle, and my last day there was going to be the 12 month mark for weight bearing on it.  I wasn’t expecting to be able to do much, in fact I was expecting to hurt myself on the first day and have my leg up for the rest of the trip. My movement was restricted so I was basically relearning how to snowboard again.

Our first night on arrival at Niseko it was snowing heavily, so we decided to start a day earlier than our ski pass and do some night boarding.  It was fantastic! My first time boarding at night, it was snowing and most of all, my ankle didn’t restrict my snowboarding.

The following days it continued to snow and we ended up hitting the mountain 2 or 3 times a day for several hours at a time, and night boarding every night.

The great thing with night boarding is there aren’t a lot of other people doing it, the beginner slopes were empty.  We had little competitions between ourselves to see who could get to the bottom the fastest.  By the end of the trip we were almost doing no turns and just pointing the boards straight towards the end.  It was some of the best fun I have ever had.

If you could go snowboarding anywhere in the world, where would you choose to go?

I have heard a lot about the Whistler and Revelstoke resorts, so I am planning to spend around 2 months in Canada having a look around.  As most of the resorts are along the highway between Vancouver and Calgary, I am thinking of doing a trip where I stop at each one for a few days along the way.

You do quite a bit of “off-season” training for snowboarding as well. tell us a bit about what the guys at Sheer put you through!

I have a practise board and jib setup for learning how to do rail slides, spins and soft landings. I got it from a company called Snowboard Addiction, they have training gear and excellent video tutorials. 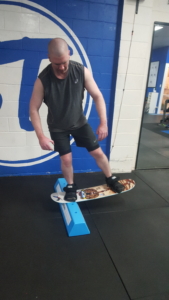 About 3 months before a season, I bring my gear into the studio at Sheer Transformations and do some practise drills to get my legs back into shape, mainly the quads as I usually feel them the most after a long session on the slopes.  Maggie, who is also the person the who first introduced me to snowboarding, arranges a strength program to assist me.

Things like box jumps with a weighted vest then doing 180 spins off, squat holds and the leg press for basic strength then we would set up bosus and I would jump from one to the other while doing 180s and 360s to train for body rotation and landing control.  I would also bring one of my boards in and practise ollies and nollies with spins added here and there to get used to the flex of the board and how much effort was required to be successful with them.

Because of a previous ankle injury, you have spent a bit more time gaming! What do you find yourself playing most often?

I have a pretty powerful gaming rig and with the downtime while recovering from the broken ankle I put it to good use. I did a LOT of gaming.

Several years ago I setup a game server machine and ran 2 games on it.  One was a Minecraft server for my nephews, the other was a modified version of Arma 3 called Exile that I created for my friends, so I spent a little bit of time there.

The game I enjoyed the most during that time was an action RPG called Path of Exile.  The developers are constantly improving the game and every 3 months they start a new league.  The week I broke my ankle coincided with the start of one of these leagues and as I was non weight bearing for 8 weeks it was almost perfect timing.  I still play it now and probably will keep playing it for awhile yet, but just not with the same amount of time dedicated to it.

When I fully recover from my injuries I wish to continue with my plan I made a couple years ago, which was to go snowboarding every year and at a different country each time.  I saw a video of man that started jumps and tricks in the snow park on a snowboard at age 40, he is now 50 and absolutely killing it. When I saw that I said “I can do that, too.” So that is where my sights are now.